Time to change the channel?

The future for HCP engagement models.

How pharma’s HCP engagement has changed over COVID-19, and what the channel mix might look like after the pandemic.

The pandemic has triggered a change in how pharmaceutical companies are engaging with healthcare professionals.

With in-person visits drastically reduced, pharma has been challenged to find ways to continue engaging effectively with HCPs via remote channels.

When Italian HCPs were asked in March (when the crisis was at its worst), if they still welcomed pharmaceutical company engagement during the crisis.

The answer was yes.

In Italy, 80% of healthcare professionals, from general practitioners to specialists, said maintaining engagement with pharmaceutical companies was important.

Italy is a high touch, relationship-driven promotional environment, and pre-pandemic, had the highest volume of face-to-face engagement activity of all major European countries, so the desire to maintain relationships throughout the crisis was expected.

When the same survey was conducted in the UK during April, the majority consensus was the same: most HCPs believed that continued engagement with pharmaceutical companies is important, during and after the pandemic.

This was interesting as pre-COVID-19, the UK’s promotional environment had the lowest face-to-face engagement of all major European countries.

These conclusions are reassuring for the industry, but still pose the problem of how pharma can “meaningfully” engage with customers.

Meaningful engagement may seem a vague term, however, research shows that healthcare professionals have different preferences, in terms of channels, types and formats of information and relationships. As the term omnichannel implies, it is usually not one single channel, but a combination of channels in the optimal mix and sequence that is most effective. Especially for launches, an interactive discussion with an HCP, most often one-to-one and most often face-to-face, was regarded as the core of meaningful engagement for product adoption.

The UK is different from the other major European countries in that face-to-face detailing, always low even pre-pandemic, has remained a tiny fraction of its pre-pandemic level, and remote detailing has risen and continues at close to peak levels.

As Graphic 1 shows, during the height of the pandemic, March-May 2020, face to face discussions between pharmaceutical companies and HCPs reduced to close to zero in all major countries. While remote communication with HCPs rose in all countries in the same time period, not all remote engagement was the type likely to be described as meaningful – much of the volume was in emails, with WhatsApp, and other remote messaging, also important during the peak infection period.

Such remote channels are important to provide rapid, basic, necessary information, and maintain relationships but lack the interactivity and scope for learning that a meaningful interaction will have. This interactivity is important when HCPs are learning about new treatments, or making new decisions about innovative approaches.

Remote rep contacts, which will replicate most closely the interactivity of a face to face call, rose in all countries during the lockdown, although as the y-axis shows, not to the levels of pre-pandemic face to face engagement.

The UK is different to the other four major European countries in that face-to-face detailing, always low even pre-pandemic, has remained a tiny fraction of its pre-pandemic level, whereas in other countries face to face has recovered a substantial percentage of pre-pandemic activity. The UK is also unique compared to other countries as remote detailing has risen and continues at close to peak levels. 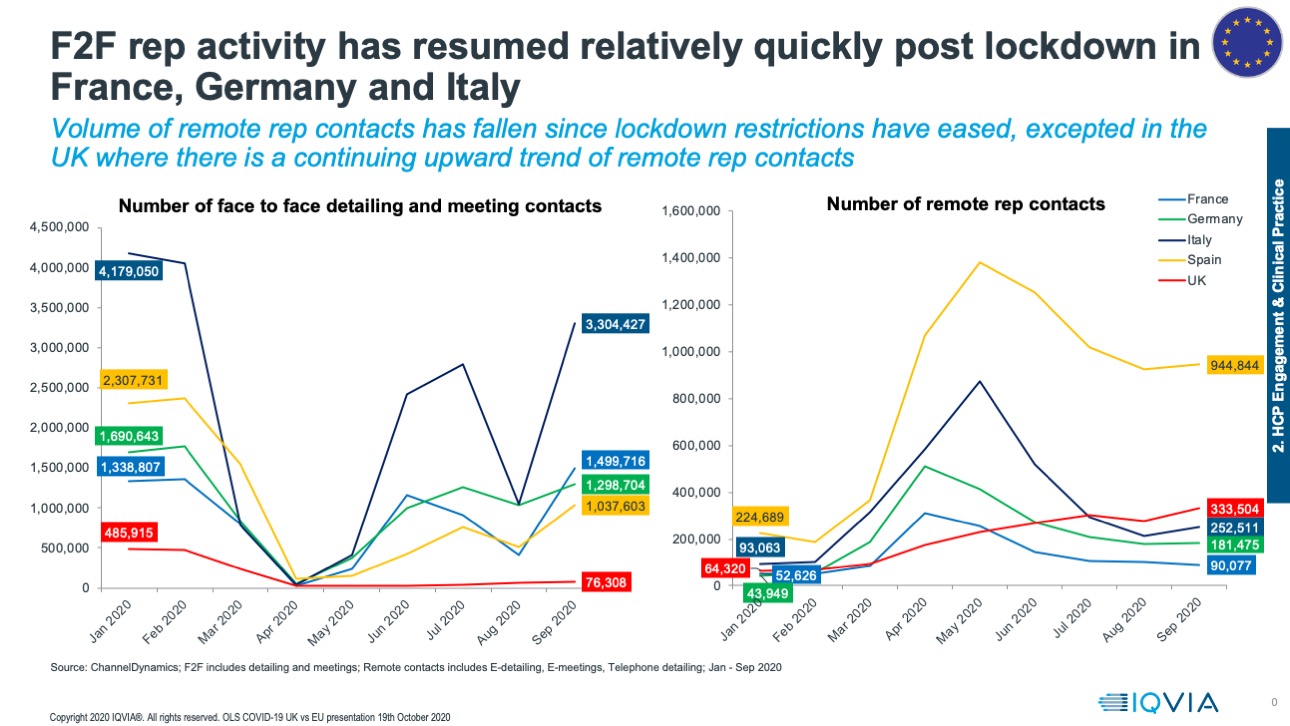 Graphic 1: Face to face rep activity is starting to show recovery, but not to pre-pandemic levels

Documenting the change in pharma’s engagement of HCPs is one thing – predicting where channel mix goes in the future, the most important question is quite another. Crucially, HCP’s preferred channels of engagement with pharmaceutical companies could, of course, have been impacted by the enforced changes at the height of the pandemic as well as HCP expectations of how they will need to operate in the more remote post-pandemic healthcare environment.

As Graphic 2 shows, 2020 has indeed brought some trend-breaking changes in HCP channel preference. There are also distinct differences in terms of what has changed between the top five European countries, and the US.

In both regions, there has been a trend away from preferring individual interactions (one to one interactions, which could be either face to face or remote). Traditionally this type of interaction has been viewed as the most meaningful and impactful.

In the US, the trend had already started pre-COVID-19. In Europe, channel preferences were pretty stable 2017-2019, but now have undergone a significant shift, with a six-point drop in preference for one to one engagement, and an 11 point rise in preference for online resources. In all countries/regions, the dominant preference shift is away from individual interaction, and towards online resources. Preference shifts for the other two groupings, meetings events and seminars (in person or remote) and published medical content, see some, but much more minor, shifts. 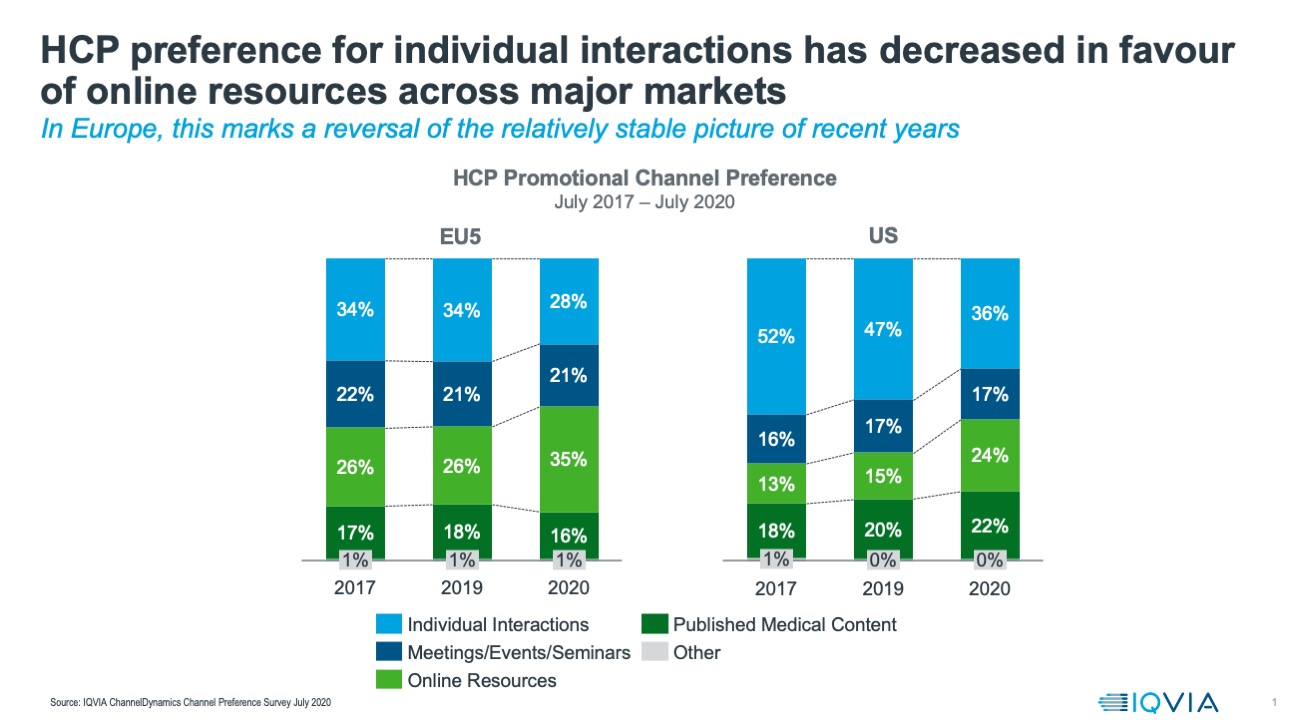 Graphic 2: Historic Channel Preference and shifts during the pandemic, US and Europe

Even if the preference is reducing for this channel as the primary source of engagement, interactions with reps are still a key part of the engagement with HCPs. While the pandemic moved those interactions from face-to-face to remote through force of circumstance, HCP preference may keep many of these interactions remote in the future. The ChannelDynamics Channel Preference survey asked HCPs whether videoconference interaction with reps would be partially or wholly sufficient for their needs in the future or not. In the US, it is now the case that a majority (54%) would agree that remote interaction with reps is either partially or wholly sufficient. In Europe, its still a minority – 44% – but a substantial one. The “virtual core” of HCPs who deem virtual interactions with reps entirely sufficient for their needs is now one in five HCPs in Europe, and one in four in the US. 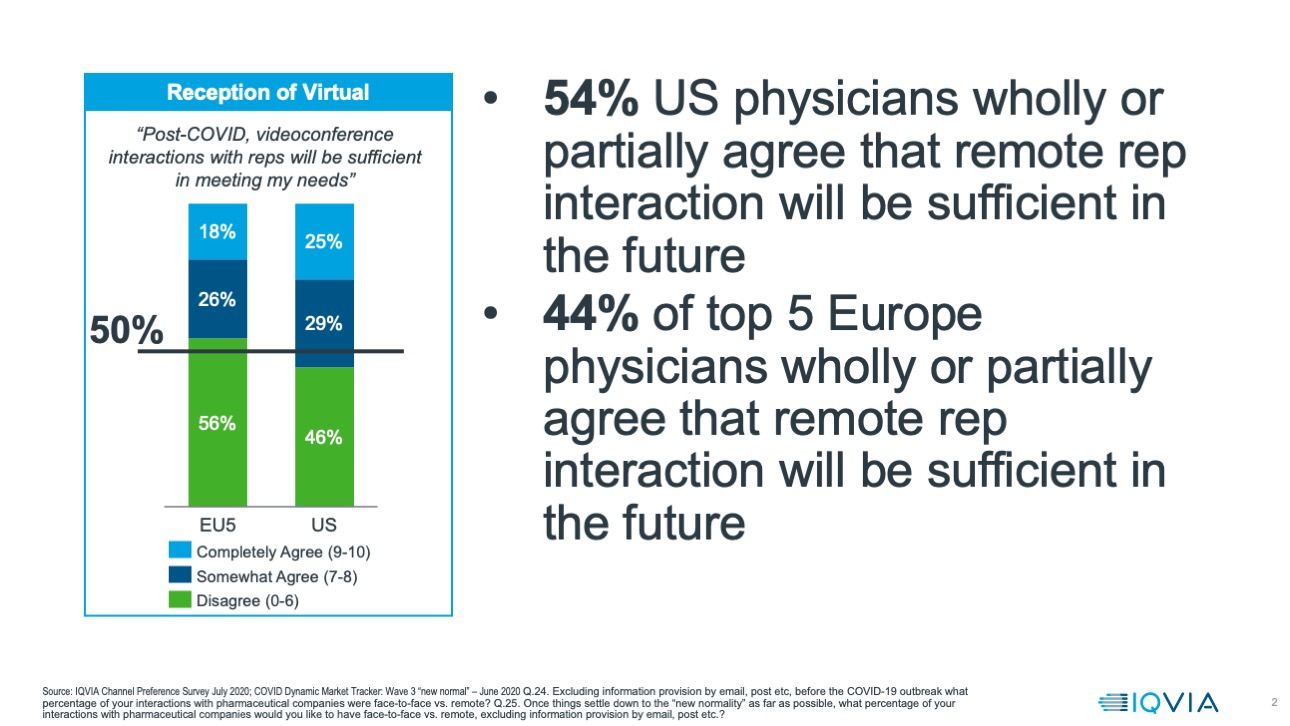 There is enough evidence accumulating to predict that the commercial model of the 2020s will not be a return to 2019, with COVID-19 a “blip”. Substantial changes in actual channel mix have been made, and HCP channel preferences have seen significant shifts.

As Graphic 4 outlines, this needs to be done from a starting point of the country’s pre-pandemic promotional “culture”. European countries with high levels of face to face rep engagement are seeing a return of this engagement, just not to the levels seen pre-pandemic.

Others, like the UK, where face-to-face engagement was already markedly low, may not see a return to 2019 levels. However, this shift does not imply reps are no longer needed. Indeed, remote or face-to-face reps generate the meaningful interaction with HCPs necessary to new and switch prescriptions, and therefore establish launch products and build growth products.

However, whatever a country’s promotional culture, changes in HCP preferences in terms of engagement must be researched. The survey findings show at an aggregate level that every company should be directly researching the preferences of their healthcare professional audience as they are now, and feeding that insight into their customer engagement strategy.

That customer engagement strategy is likely to be a hybrid model in the future, with reps engaging with HCPs both face to face and remotely, informed by circumstance and HCP channel preference, and with the rep engagement embedded in a channel mix designed to have an impact greater than the sum of its parts. Other commercial and customer-facing individuals, such as key account managers, will also find they will need to adopt this hybrid approach when engaging with institutional stakeholders. 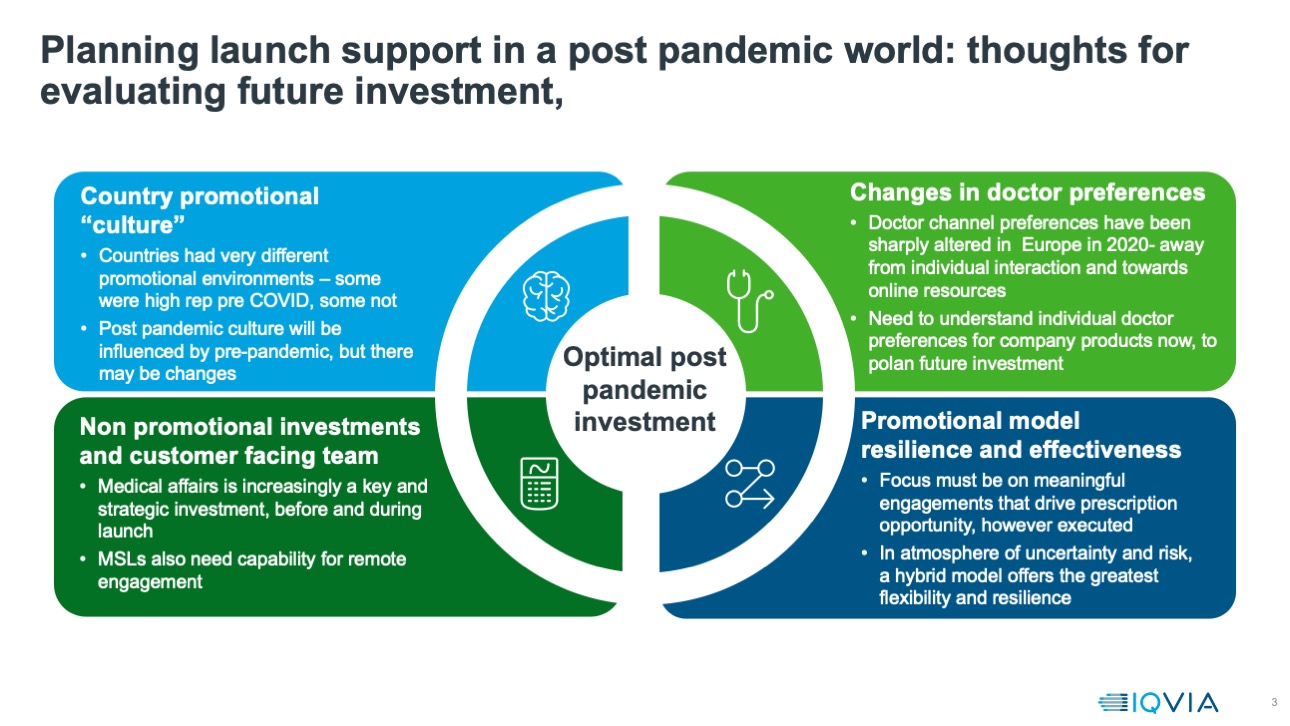 Graphic 4: Planning the commercial model in a post-pandemic world

Changing the channel can be daunting, and pharmaceutical companies have overall taken an incremental approach to developing commercial models. The survey shows that face-to-face selling remained the globally preferred channel, with just over 60% of measured marketing expenditure placed on reps – a level that has remained constant for several years.

While 9 of the 10 leading companies did pullback in terms of estimated sales force activity in 2019, total rep equivalent (FTE) volume was down only slightly (1.3%) worldwide for the year.

Likewise, other “traditional” channels continued to command a large share of the marketing mix budget through 2019. On-site meetings & events, samples and DTC featured heavily, accounting for over 30% of the mix. Meanwhile, investment in digital channels, as measured by ChannelDynamics, was up 19% worldwide in 2019. Once again, this represented a double-digit increase on the previous year but only brought the share of spend on that channel to 6% of the channel spending mix.

Prior to the pandemic, the possibilities of multichannel marketing were only just starting to be tested. COVID has now disrupted a commercial model that was slow to change – and as with all disruption, there will be innovative and creative new ways of engaging with HCPs in the coming months and years.

The promotional mix of the most commercially successful recent innovative launches in the US, top 5 Europe, and Japan.

When this issue was first researched in 2018, looking at a cohort of launches that came to market between 2012 and 2016, it was found that the average first-year volume share of promotional activity that was digital was, on average, nine points higher for the most successful launches than the rest, and was higher in every single one of the countries.

In updated work, looking at pre-pandemic launches, but up to 2018 (then followed for a year to the end of 2019), it was found that higher digital volume share for the first year promotion of the most successful launches replicated, whether those launches were specialty launches or primary care (see graphic 5).

Digital here includes channels such as email which are more enablers for other meaningful interactions. Yet interactive e-details and other meaningful contacts are also within the digital mix. Even before the pandemic forced a more remote environment for engagements, and changed HCP channel preferences, the seeds of the commercial model revolution were already sown. 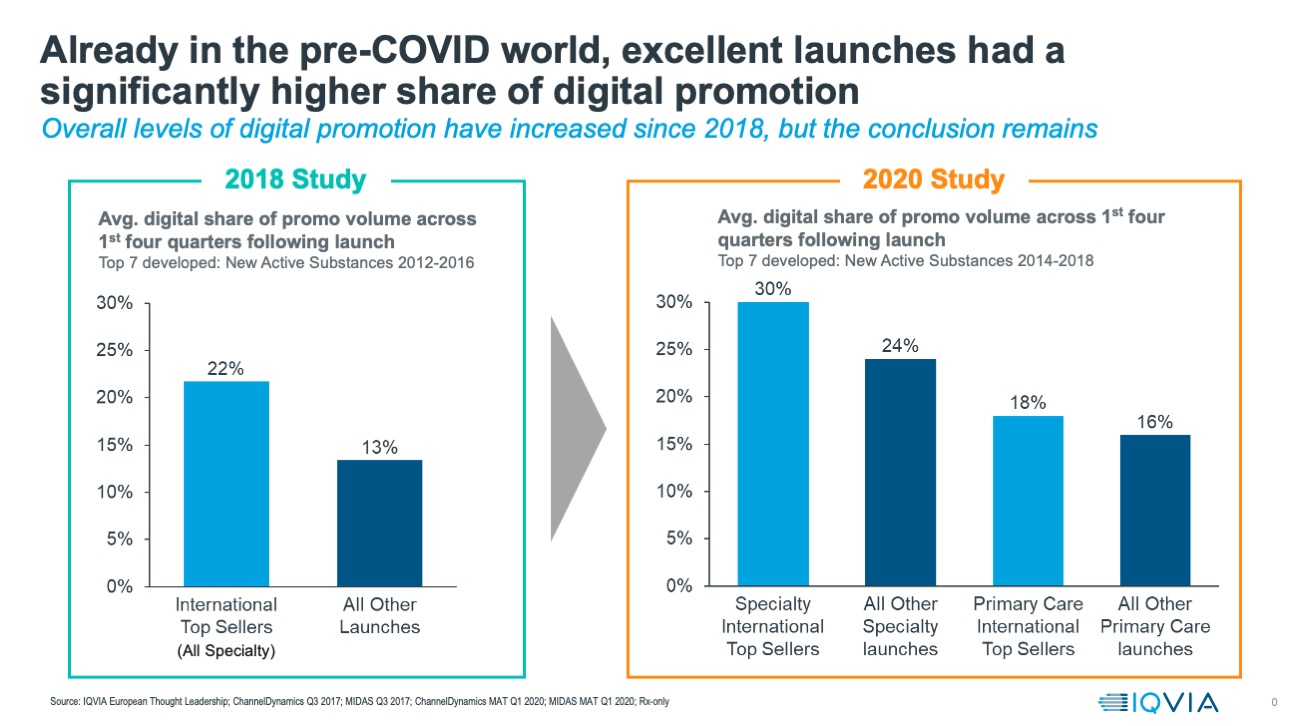 Whether you’re looking for effective solutions to transition F2F meetings to a virtual or online environment, support with clinical trials, medical advisory boards, symposia, key opinion leader (KOL) management, internal medical training, medical writing or speaker training programs and more, count on our 15-year experience and expertise over 40 therapeutic areas. SDM also offers strategic consulting services and can help you navigate the regulatory restrictions in other jurisdictions. Discover why over 95% of clients are “Extremely Satisfied” with SDM and over 90% say the agency deliver “Much more than expected”.

SEND US YOUR CONTACT INFORMATION VIA THE FOLLOWING FORM AND
WE WILL BE IN TOUCH IN NO LONGER THAN 1 BUSINESS DAY.

Ex: if you already know you need Medical Writing services, send us that information. If you just want a comprehensive view of the medcomms solutions we provide, let that clear so the best-suited team member will be in touch with you.