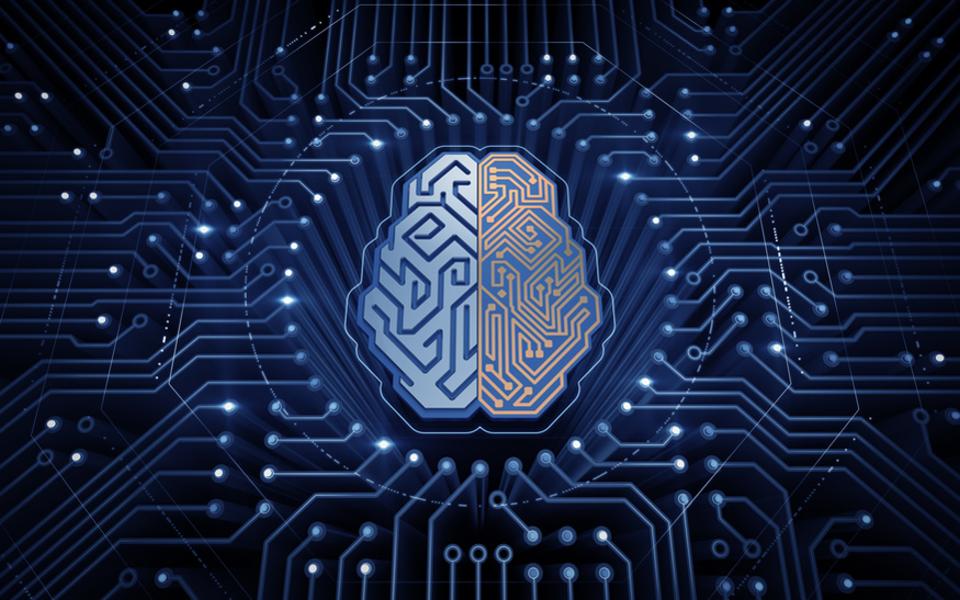 The pharmaceutical business is perhaps the only industry on the planet, where to get the product from idea to market the company needs to spend about a decade, several billion dollars, and there is about 90% chance of failure. It is very different from the IT business, where only the paranoid survive but a business where executives need to plan decades ahead and execute.

So when the revolution in artificial intelligence fueled by credible advances in deep learning hit in 2013-2014, the pharmaceutical industry executives got interested but did not immediately jump on the bandwagon.

Many pharmaceutical companies started investing heavily in internal data science R&D but without a coordinated strategy it looked more like re-branding exercise with the many heads of data science, digital, and AI in one organization and often in one department. And while some of the pharmaceutical companies invested in AI startups no sizable acquisitions were made to date. Most discussions with AI startups started with “show me a clinical asset in Phase III where you identified a target and generated a molecule using AI?” or “how are you different from a myriad of other AI startups?” often coming from the newly-minted heads of data science strategy who, in theory, need to know the market.

However, it was not possible to get a comprehensive overview and comparison of the major pharmaceutical companies that claimed to be doing AI research and utilizing big data in preclinical and clinical development until now. On June 15th, one article titled “The upside of being a digital pharma player” got accepted and quietly went online in a reputable peer-reviewed industry journal Drug Discovery Today. I got notified about the article by Google Scholar because it referenced several of our papers. I was about to discard the article as just another industry perspective but then I looked at the author list and saw a group of heavy-hitting academics, industry executives, and consultants: Alexander Schuhmacher from Reutlingen University, Alexander Gatto from Sony, Markus Hinder from Novartis, Michael Kuss from PricewaterhouseCoopers, and Oliver Gassmann from University of St. Gallen. Upon a closer look it turned out to be not a perspective but a comprehensive research study with a head-to-head comparison of the pharmaceutical companies by their efforts in AI in research and development.

The study compared the pharmaceutical companies by the internal AI R&D projects, partnerships with AI startups, investments in AI startups and R&D alliances and consortiums between 2014 and 2018. It also compared the pharmaceutical companies by the number of scientific publications from 2014 and 2019 segmented into discovery, development, and others showing the clear leadership of Novartis in internal efforts and AstraZeneca in publications. 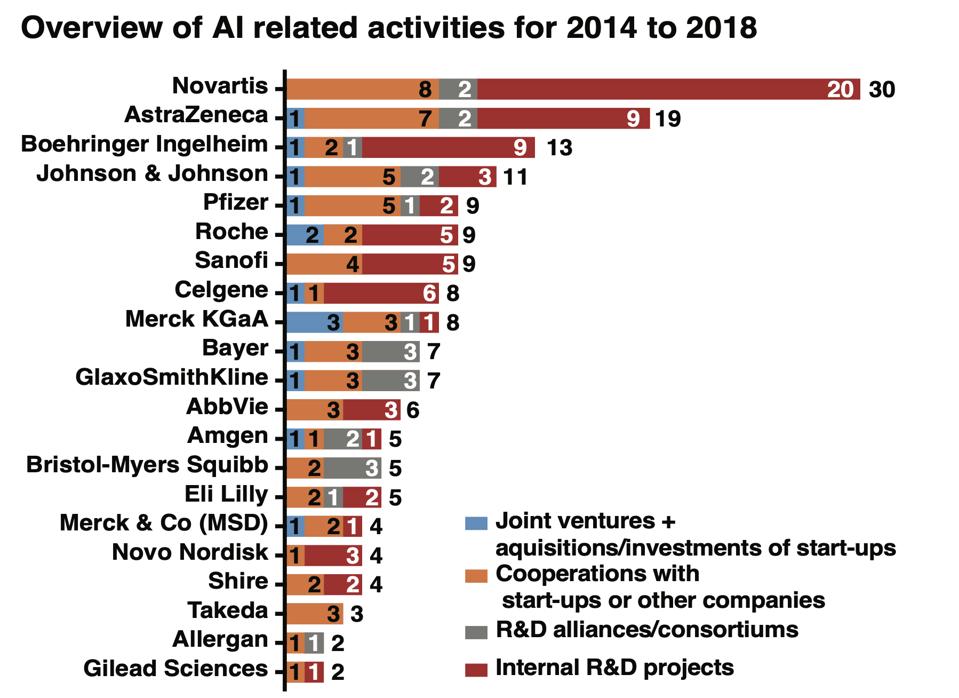 Before this study came out, to the industry insiders performing regular literature reviews it did feel like AstraZeneca was publishing more than any other pharmaceutical company. Only in 2019 AstraZeneca scientists published about 1,300 scientific papers. It also also felt that Bayer had a few nice papers. The highest number of publications across all segments was 65. For reference, a startup like Insilico Medicine published about 100 papers and about 30 patents in the same period not counting AI conference papers. Several other startups also did quite well in that area and it would be great to see similar analysis. 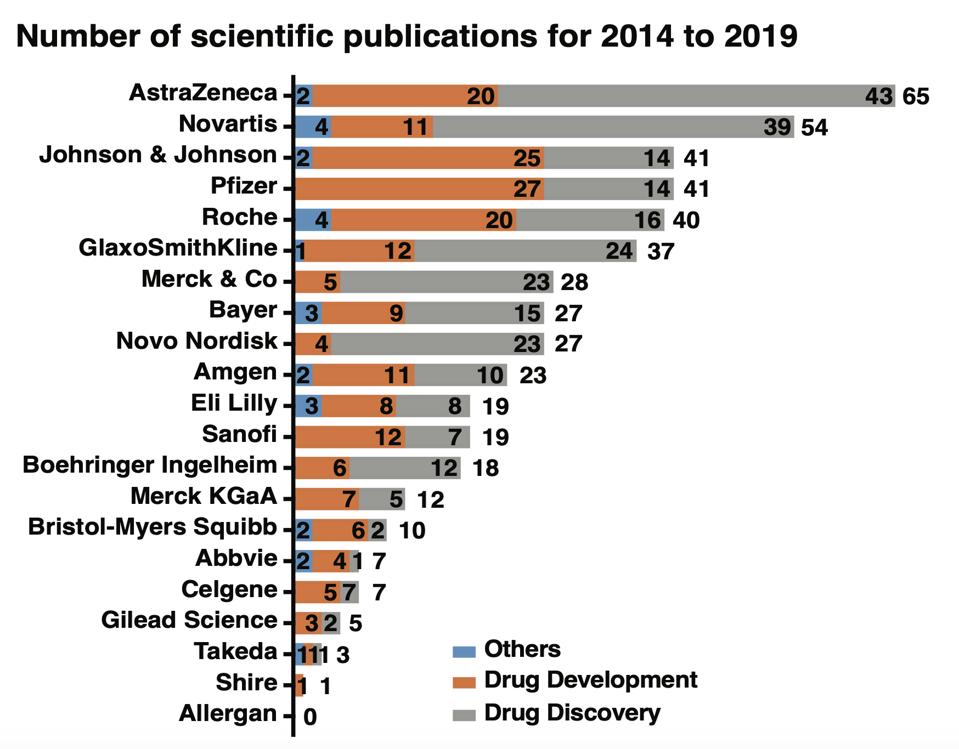 The authors of the study certainly deserve to be referred to as industry experts in the pharmaceutical AI R&D as they did a gargantuan amount of work to compile the three relatively simple figures in the study and at the moment no other study like that exists.

1. Looking under the hood of the top 21 big pharmaceutical companies and analyzing their activities in digital and AI is a gargantuan piece of work. Many analysts are trying to do the same thing with little success. How long did it take you and how did you manage to do it?

Gassmann: Indeed, it was a big piece of work. Much is publicly available, such as patents and scientific publications. In general, most valuable are interviews with executives in the pharma sector. Building up the reputation took for most of us more than 20 years.

Gatto: In addition, a key success factor was the interdisciplinary background of the authors – including pharma strategy, R&D and AI competencies.

2. Did any of your findings surprise you?

Kuss: The findings were not surprising as such. But the early mature status with respect to the use of AI in pharma R&D seems to be a big challenge for the industry.

Schuhmacher: The future availability of low prized AI-applications in combination with faster and cheaper hardware will boost the trend of digitalization of pharma R&D. The immense need to increase R&D efficiency will do its part for the success of AI in pharma.

3. Did you see any conclusive case studies where AI dramatically outperformed humans or any of the published work where AI replaced the need for experiments?

Gatto: We could identify several cases where we saw that there is the potential that AI might replace the need for experiments or outperforms humans. All in front a recent publication in Nature Biotechnology on de novo small-molecule design highlighting the huge potential of AI in drug discovery.

4. I am certain that some of the pharma CEOs, CFOs, and other executives saw your paper by now. Did you get any comments? What was their initial reaction?

Schuhmacher: We did not get direct feedback yet, as the publication is brand new. In general, we noticed that pharma R&D executives have shown their interest in our recent work on virtualizing pharma R&D.

Gassmann: In addition, we can observe a slow change in pharma towards the digital side of health care. While 10 years ago many pharma managers could not believe that data based companies can really capture a larger part of the health care value chain, today it is more widely accepted that software eats the world, data change the pharma industry.

5. You even made a comparison of scientific publications between 2014 and 2019. My company published over 100 papers in that period, while the largest number for big pharma was 65 and some had zero publications. To me, it seems dramatically low. Why do you think this is the case?

Schuhmacher: It looks like that AI is still not part of the core strategies of some of the leading companies. And they still rely too much on the closed innovation paradigm: Publishing is not part of their revenue and R&D models. But this might change: Pharma companies need to be attractive to data scientists and other experts and need to show their excellence and competitiveness.

6. One of the major challenges in AI for drug discovery is intellectual property and many of the methods have blocking IP. In my opinion, one of the reasons why DeepMind was acquired early by Google was its strong IP portfolio. Did you look at the AI-related patents filed by these big pharmaceutical companies?

Gatto: Looking at the pure figures of AI-related patents reveals that there is a huge discrepancy between pharmaceutical companies and IT giants such as Google. But this pattern might change over time, when pharma is changing its R&D model and the way of how to exploit AI-related IP.

7. What do you think is going to happen in the next 1-2 years in this field?

Gassmann: 1-2 years is a short time for the pharma sector but AI will further come. Companies from the consumer electronics like Apple and data field like Google have already FDA registered wearables. Today those devices are still very unreliable but performance will increase fast. Chronical diseases such as Alzheimer, diabetes, or cancer will be the entry field for digital health interventions where longitudinal data create a lot of value. Pharma have to rethink the way they innovate and to start thinking in ecosystems.

Kuss: In our view, reimagine R&D as a crowdsourced ecosystem is the key for future success of pharma: pharmaceutical R&D will no longer be limited to predominantly internal value creation but will capitalize on a network of internal and external ideas, technologies (including AI), and resources.

Gassmann: This research should be just the start. For the next years we are planning to build up a collaborative center on pharma innovation research that will advance the insights on pharma and biotech R&D management in context of AI and other emerging technologies.

9. Can you tell me about the future directions for your research?

Schuhmacher: AI will have an immense impact on future R&D models and on the pharma R&D ecosystem as such. This together with other strategic and technological transformations will drive our research agenda for the coming months.

Kuss: Smart contracts based on distributed ledger technologies will play a key role in this change process.